Pierneef and Mariane in front of the fireplace in the dining room of the Agnes Hotel.

The famous South African master, Pierneef, spent some time during his career in Hartbeespoort, Pierneef portrayed the Magaliesberg in various works. After resigning as a lecturer in 1923 he became a full-time artist. It was a difficult time in his life – his first wife Agatha Deelen, suffered from a mental disorder and started lo lose her sight. Agatha was 12 years older than Pierneef and due to her illness became increasingly dependent on Pierneef.
Pierneef was a typical struggling artist and during 1924 stayed with various families around Hartbeespoort, including the Prellers and Schoemans. He often paid his rent and bills with pieces of his artwork. It was during this period that Johan Schoeman commissioned Pierneef to do a series of posters around Hartbeespoort as advertisements for the development of Schoemansville. The most famous one is the poster of the view from Saartjiesnek over the Hartbeespoort valley welcoming potential buyers from Johannesburg and Pretoria.
On 16 May 1924 he met his soon to be (second) wife, Mariane Frances Schoep (35) at the Agnes Hotel (later the Lake Hotel and today the Squires building opposite the Snake and Animal park)
In July 1924 Pierneef travelled to Namibia and upon his return in October he filed for divorce from Agate. He got remarried on 18 November to Mariane. Pierneef did not have enough money for an engagement ring and painted Blue Magalies for his soon to be bride. The painting depicts part of the Magaliesberg behind the then Agnes hotel.
In 1929 Pierneef received a commission for large panels to decorate the then new Johannesburg Railway Station – 28 paintings of the natural scenes and historic places in South Africa including the newer version of the original Saartjiesnek poster. 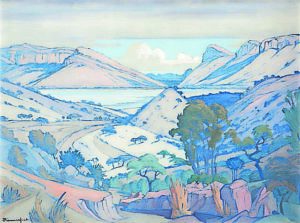 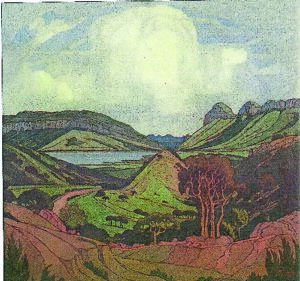 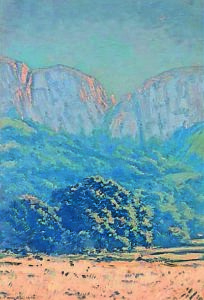